In 2010, I had a chance to stay for a long time in Cairo, the capital of Egypt. Authentic and ancient; noisy and cheerful; poor and rich; selling everything, with entertainment for any taste. Along the great Nile you find the best hotels & skyscrapers, with casinos in the higher-end locations.

One of the most notable buildings was the Sofitel hotel, located on the island of Gezirah right in the middle of the Nile. Every day I walked there from the old center of Cairo on the ancient bridge Qasr El Nil Bridge, guarded on both sides by stone lions. I had played at the El Gezirah casino, the local name for the casino operated by the French Barriere Casinos group. I remember I had lost a lot the first time I played there. I was unlucky. However, over time, spending long nights there (the casino was open only at night), I had managed to get all my money back and even won good money on top of that. Actually, the reason I remember this casino is that I had won a decent amount – more than 20 thousand dollars in just one night!

During the time I had played at the Casino Barriere El Gezirah, I remembered the names of the dealers and other employees who talked with me. Managers were not very sociable in this casino but they closely watched my game. I played “black” (the common color of $100 chips) and that was a bet above average.

One afternoon my friends and I had decided to visit the Giza Pyramids once again (for the fourth time). I was pretty tired after sightseeing but I still decided to play in the Casino El Gezirah Barriere. Just an hour later, a guy by the name Amir had given me four tens in poker with a $200 ante and a $10,000 payout. That was nice. I kept playing and just a couple hours later a girl by the name of Rasha (I had noticed  earlier her name was in tune with the name of my country – Russia) gave me a second four of a kind – four fours. I got another $10,000. Sometimes you play poker for weeks and never see four of a kind, but that day I had been given them twice and paid both times. It was a really lucky day (or rather night) and maybe the spirit of the Egyptian pyramids had helped me 🙂

I ended up with a good win. There is nothing special about the look of the chips from this casino, nor their design, but they are one of the favorites in my collection! 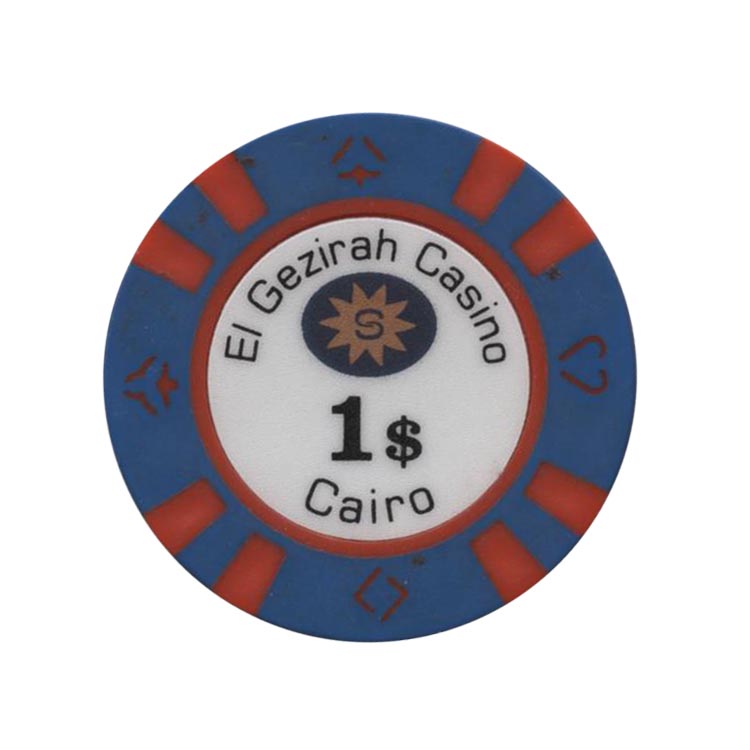